In the words of Yogi Berra, "It's deja vu all over again". 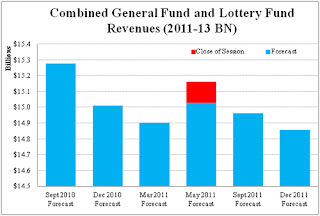 The state released it's latest look into it's crystal revenue forecast ball and once again the amount of money coming into the state or Oregon will be lower than predicted. It seems this is about all we have come to expect over the last few years as forecast after forecast has been wrong. We now find out that expected revenue is going to be short another 107 million, which added to the 198 million drop in August, adds up to 305 million short so far and we are only 1/4 of the way through a two year budget cycle.Amid much criticism during the legislative session, the legislature wisely set aside 460 million in reserves in case this happened, roughly 3.5% of the General Fund budget. Thanks to Rep Dennis Richardson for the above chart.

The Governor told state agencies today not to expect to have the 3.5% budget holdbacks restored given the latest forecast and the likelihood of further revenue losses from Oregon's slumping economy. Given all of this, I will guarantee you that there will be plenty of inappropriate, un necessary and wasteful state spending that is still occurring that needs to be exposed and cut. Be assured that Oregon Capitol Watch will be watching!
Posted by Jeff Kropf at 9:34 AM No comments:

The Need for Greater Transparency
Do you ever wonder how backroom deals that lead to government corruption or wasteful spending escapes attention until it exposed? Doesn’t common sense dictate that government should be as transparent as possible so there is no opportunity for waste or skullduggery?

It seems that almost daily there is some story in Oregon or nationally about a government entity that engaged in questionable spending of the taxpayer’s money. The emerging scandal with Solyndra on the Federal level is an example of what happens when backrooms deals that benefit a few at the expense of the many are exposed to the light of day.

Here in Oregon, a similar tale of crony capitalism and backroom deals was revealed in an Oregonian story on May 25, 2011 http://www.oregonlive.com/politics/index.ssf/2011/05/documents_show_oregon_hospital.html  about a very profitable contract the Oregon Hospital Association received from the state to duplicate a monitoring function the state already does after the association agreed to a new tax. Only a handful of Democrat legislators during the 2009 legislative session were privy to the tax increase deal, yet now claim to know nothing about the sweetheart contract until someone tipped off Rep. Julie Parrish who handed it over the Oregonian.

The real problem here is the lack of transparency with the contract between the Hospital Association and the Department of Human Services, which was not discoverable at the time the state’s transparency website was just being stood up.

Yet, even with the state putting most of it’s outside vendor contracts online, it still doesn’t provide detailed data on what taxpayer money is really buying, leaving the door wide open for more corrupt, back room deals, fraud and just plain old wasteful spending.

This article in the Statesman Journal from September 2011 http://www.statesmanjournal.com/article/20110925/NEWS/109250346/State-can-t-quantify-its-contract spending?odyssey=tab|topnews|text|News  amazingly reports that the state really doesn’t know how much it is paying out in vendor contracts or what those dollars are really buying. Frankly it lays out the case for why more transparency is needed to make sure the taxpayers are getting the biggest bang for the buck. We the people should have the ability to closely examine the actual contracts, monitor payments and decide whether we are getting the most for our money.

It’s obvious that greater transparency is needed in Oregon as it means there will be less crony capitalist, back room deals like the one in the Oregonian story referenced earlier in this post.

Oregon Capitol Watch Foundation was established for this purpose of providing greater transparency.  We are dedicated to researching, documenting and publicizing government spending in an effort to educate citizens to how government spends their tax dollars.

Stay tuned as we are just getting started.

Posted by Jeff Kropf at 6:35 PM No comments: